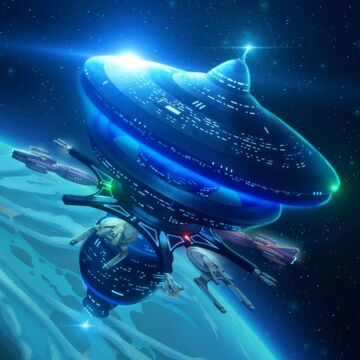 Over the course of 2388 and the beginning of 2389 saw a change in power in both the Klingon and Romulan Empires. The Sovereignty Of Kahless grew larger and is close to pushing the Klingon High Council into Civil War. The Free Romulan Movement has also gained momentum in the last year, solidifying the Romulan Government at Rator III to combat the emerging threat to their empire.

With this in mind, Starfleet felt a presence along the eastern edge of the Raeyan Transit Corridor was once again needed.

When Captain Refelian decided to retire and return to Earth, Commander M'Mira took his place. With M'Mira in command, a cold peace has developed between the Falteans and Faltan Station. It is now the year 2390 and negotiations have started to give the Federation a permanent residence at the station.

Do you think you have what it takes to help get Faltan Station back to its former glory?

Don't see a position you'd like? Don't be put off! Contact us and we'll see what we can do for you!

» Congratulations Are in Order

Faltan Station has won the Gameplay Award in the Tournament of Sims! The judges made special mention was given to the Tomer-Kara posts and Tomer's nickname of Spots for Kara.

We really should get back to posting. Let me know what I can do to assist.

We have a new crew-member!,

Everyone please welcome aboard Lieutenant Rohan Read, our new Chief of Strategic Operations.

Rohan is played by Steve who is currently here as Captain Colburn of the USS Kumari.

Welcome aboard Steve and Rohan!

The following is a news item from Commander M'Mira

Normally, I send these status update out on the first of the month (give or take a few days) to give an overview of everything that happened in the month before and of what our goals are for the upcoming month.

In August, we stayed stable at 9 users and 14 player characters.

We're going to continue improving upon the site to make it attractive and informative for all. If there's something that you want to see that we don't have, please let us know!

We had 8 posts in August, which is an improvement over 5. However, we can do much better with 9 users and 14 player characters.

Faltan Station has been fairly calm for the last four months. However, people have been leaving Faltan due to the building of a starbase. M'Mira is determined not to the Falteans bully the Federation off of the planetary base that she fixed up and has been bringing in new personnel, many from the Kumari. M'Mira has been pleased with these developments but Candy, the FNS reporter is growing bored because she came to Faltan for action and it has been calm.

In the meantime, the Assistant Chief of Security, Tomer Chaim and his pregnant wife, Kara Quinn-Chaim went to visit the private miners on Luna and came away with the impression they were hiding something. Also a Ferengi Ambassador has arrived with his three female assistants? to stay on Faltan.

Determine the nature of Santa Claus and prevent him from destroying Faltan Station.

Player of the Month

Our player of the month this month is our Chief Medical Officer, Tristian Hudson, who had participated in fully half of the posts in August! Congratulations!

If anyone has any ideas for character development or even some subplots, share them with us. I know that my door, as well as my XO’s are always open. Any questions, comments, or issues, please don’t hesitate to contact the Command team. We are here for you!

Thanks to our webmaster Beeman I’ve been able to change to the new site skin I’ve been wanting.

With Grace returned to the station and in the care of her husband, both Kara and Tomer had been cleared for duty.

Having found a functioning holodeck she called up the setting of one of hers and Tomer’s first night together, fun on the beach and the beach house…

» Welcomed Visit from the Chief of Operations

Tristian was in sickbay. He was attending his Wife Grace as a daily constant. Kara also was on Tristian's minimal number of rounds, now that the twins, the babies had been transferred to her Trill/Human womb.

Having disposed of Yuri, her new Chief Strategic Officer, M'Mira was ready for a catnap. She was fairly certain out of the corner of her eye, she saw her nosy reporter, Candy Templeton go after him. The reporter certainly had the ability to do strategic ops or intelligence work if…

Natalia had received orders just around Christmas time from Starfleet. She was being transferred to a base out in the Raeya Sector Block-- pretty much the backwater of the Federation.

Yet, orders were orders. Still, she wondered who she ended up pissing off.

As she exited the transporter hub,…

The Varanmar Mountains were an old ridge, mostly covered by pine-like forests. Rarely, the blank rock could be seen or a peak reached high enough to be covered with snow. In a valley, only connected to the capital by a primitive road, was the new estate of House S'Terion. The…

Fitzgerald's Personal Log, I feel quite uneasy at times, It's been several Months since my time on the Triton, since everything happened. But I am confident that with this new posting at Faltan Station, I'll be back up and back to my usual self. It's not often you get a…

"Chief medical officer's personal log, supplemental. I've just woken up from my induced sleep and am preparing for the mission to recover survivors of a Starfleet vessel in distress. Due to the nature of this mission, I will not give any details regarding the ship or the conditions around it.…

» Who needs a counselor?

Medical Officer's Personal log. I can't help but feel overwhelmed by what happened out there. I didn't feel useful, in fact I felt my presence was more of a hindrance than help. I had no time to meet or get to know any of those who rendered aid before I…

Damon was in his office, going over multiple reports involving: the attack on the Romulan compound, the meeting with the colonel and the major, and the plan to combine security and marine units to help safe guard the station.

The analysis on the weapons used in the compound attack were…